Parents expect to have awkward conversations with their kids; the birds and the bees, the dangers of drinking and driving and the consequences of taking street drugs being a few. But, as we are unfortunately finding out as of late, many parents aren’t talking to their kids about prescription pill abuse, which has led to an opioid overdose epidemic. 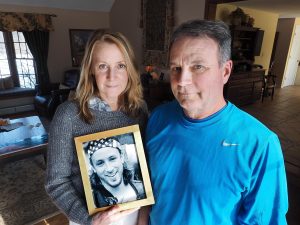 No one regrets not having that conversation more than Jim and Jeanne Moser, the parents of Adam Moser, who was only 27 when he died from a fentanyl overdose in 2015. According to the U.S. Centers for Disease Control & Prevention, more than 33,000 people died from an opioid overdose in 2015 – more than any year on record – with prescription opioids accounting for nearly half of that amount.

The Mosers didn’t know about Adam’s prescription pill habit until it was too late. “We used to keep our medicine in the kitchen,” said Jim. “And I thought, how did we miss that? Then I realized, we never absorbed that information ourselves because we just didn’t know.”

But the Mosers aren’t the only ones who were in the dark regarding the risks of keeping these dangerous prescriptions around. That’s why they started the Zero Left for the Medicine Cabinet – also known as Zero Left – campaign to encourage the healthcare industry to stand up to the opioid crisis by educating patients on the dangers of opioids and the proper methods for the safe storage and disposal of pills.

Children who understand the full risks of abusing prescription medication are much less likely to develop dangerous habits, and Zero Left wants people to start talking.