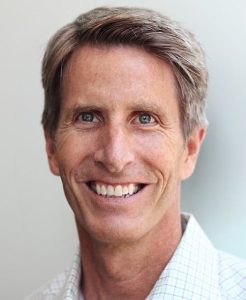 Eric Langshur has been committed to health and well-being innovation for over fifteen years and today is an author, sought-after public speaker, entrepreneur and investor.

His New York Times best selling book, Start Here: Master the Lifelong Habit of Wellbeing, co-authored with Nate Klemp, synthesizes the world’s ancient wisdom about well-being, validates it with cutting edge neuroscience and translates these big ideas into effective practices. Start Here, released in May 2016, is published by Simon & Schuster in the United States and Hachette/Larouse internationally.

Eric has dedicated his career to modeling a values-based leadership that leans on caring for people by investing in developing their potential. He cultivates an industry-wide move toward organizations that nurture individuals while unleashing the power of innovation though Abundant Venture Partners, a purpose-based firm focused on investing in and building companies in healthcare and media.

Eric is available to speak about Start Here, as well as topics such as Transforming Organizations by Helping Employees Be Less Stressed and Have More Positive Energy, The Power of Habit, and How to Live in Harmony and Be Happier.

Eric holds an MBA from Columbia University. He and his wife Sharon, live in Chicago with their three children.

Listen to Eric Langshur on Steppin’ Out Radio