From the first third-generation player in Major League history, a sometimes moving, always candid inside look at his family’s seventy years in baseball. 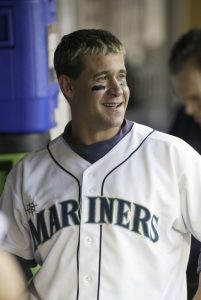 A five-foot-ten fireball questioned by scouts because of his small stature, supposed lack of power, and cocky attitude, Bret Boone (@theboone29) didn’t care about family legacy as he fought his way to the Major Leagues in 1992; he wanted to make his own way. He did just that, building a career that featured three All-Star appearances, four Gold Gloves, a bout with alcohol­ism, and the mixed blessing of being traded three times. But now that he’s coaching minor leaguers half his age—and his fifteen-year-old son has the potential to be the first fourth-generation Major Leaguer—Bret has a new perspective on his remarkable family, with its ten All-Star appearances, 634 home runs, 3,139 RBIs, and countless kitchen-table debates about the game’s great­est players. For the first time, he’s ready to share his adventures as part of the sport’s First Family. 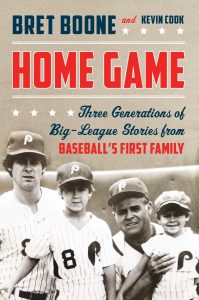 Infused with Bret’s candor and deep love of the game, Home Game traces baseball’s evolution—on the field and behind the scenes—from his grandfa­ther Ray’s era in the 1950s to his father Bob’s in the ’70s and ’80s to the one he shared with his brother Aaron in the ’90s and 2000s—sometimes called the PED era—when players made millions, dined on lobster in the clubhouse, and, in some cases, indulged in performance-enhancing drugs. Along the way, his book also touches on Boone family lore, from Ray playing with his hero Ted Williams and Bob winning a World Series with the 1980 Phillies to Bret’s flop in a nationally televised home-run derby and Aaron’s historic home run in the 2003 playoffs.

Blending nostalgia, close analysis of the game, insight into baseball’s un­written codes, and controversial thoughts on its future as a sport and a busi­ness, Bret Boone offers a one-of-a-kind look at the national pastime—from the colorful, quotable scion of a family whose business is baseball.

Listen to Bret Boone on Steppin’ Out Radio