The name Anthony Papa might sound familiar. He has been profiled in hundreds of stories.  Recently he appeared with singer Sting, Montel Williams and billionaire financier George Soros in a very moving PSA about the drug war.

Maybe you saw him in the new Brazilian feature drug war documentary titled Breaking the Taboo with former Presidents Bill Clinton and Jimmy Carter.  Or read about him putting pressure on politicians to change the Rockefeller Drug Laws and grant clemency to those who have fallen through the cracks of reform. 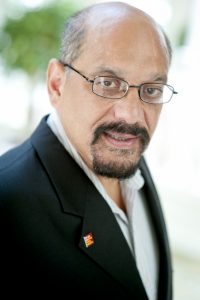 Maybe you were one of the millions of New Yorkers who saw him in a political television commercial about the Rockefeller Drug laws for billionaire Tom Golisano in his race for governor of New York . You could have read The New York Times’ moving profile of Papa after he was granted clemency by Governor George Pataki in 1997.  Or  perhaps you  saw him speak as the keynote speaker at the largest  Rockefeller Drug Law reform rally ever held in Albany  NY or in NYC where 50,000 people turned out for “Countdown for Fairness”, a unprecedented national coalition to repeal the laws.

Maybe you saw him on Democracy Now talking about injustice of the laws and his book 15 to Life.

Maybe you saw his celebrated painting, “15 Years to Life: Self Portrait,” exhibited at the Whitney Museum of American Art or saw his political art installations or his body cavity search series which depicts the dehumanizing nature of the prison experience.

Whether you’re art lover or not, chances are you’ve heard of Anthony Papa. His powerful message comes from the twelve years he spent in a maximum-security prison for passing an envelope containing 4 ½ ounces of cocaine. His story is all too familiar to the 12,000 New Yorkers in prison today for drug offenses and to the 500,000 plus Americans in state and federal prisons for drug-related crimes. His articulate advocacy for drug law reform has informed countless journalists about America’s war on drugs and the country’s burgeoning prison population. Papa’s story speaks the message of the blockbuster movie, Traffic, and award-winning prison dramas such as Dead Man Walking that reveal the injustices of America’s criminal justice system.

Anthony Papa on Steppin’ Out Radio