More than a half century since his reign as the Justin Bieber of the “Camelot” era, reviewers unanimously agree that multi-talented entertainer Bobby Rydell (@BobbyRydell) has told one hell of a story with today’s release of his compelling new autobiography, Teen Idol on the Rocks: A Tale of Second Chances.

From his vivid childhood on the fabled mid-20th-century streets of South Philadelphia through his more recent battles with alcoholism, and his lifesaving double-transplant surgery (he shares a liver with an eight-year-old girl), Rydell “has unbelievable stories to tell, and he’s sharing the good, the bad, and the fascinating,” says Parade magazine.  The Huffington Post adds: Teen Idol on the Rocks is “pure rock n’ roll nostalgia with a big dose of personal memories that will tear your heart out. … another reason to embrace him even more!”

Rita Cosby, Emmy-winning TV and radio host, calls the book “captivating, charming and extraordinary as the man himself,” professing her love for “its soaring story line.” Stu Bykofsky, widely regarded veteran Philadelphia Daily News columnist, praised Rydell’s “conversational style” and marveled how he “cuts himself no slack when he discusses how and when he crawled into the bottle” in a book “so honest and warm it makes you glad he got through it and is performing today.” 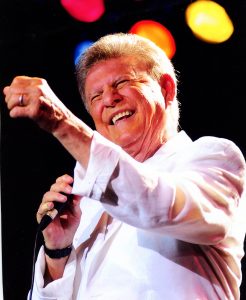 The attention surrounding Teen Idol on the Rocks is just one aspect further confirming Rydell’s still explosive career. Aside from continuing to tour around the world as a “saloon swingin’” solo artist and with fellow South Philly “Golden Boys” Frankie Avalon and Fabian in a road show with over 30 years of staying power, Rydell will be gracing the silver screen next year in Taylor Hackford’s The Comedian with Robert De Niro ─ 54 years after his indelible song-and-dance acting stint opposite Ann-Margret in the iconic movie musical Bye Bye Birdie.

Co-written with award-winning musician-author-filmmaker Allan Slutsky (Standing in the Shadows of Motown), Teen Idol on the Rocks not only tells the story of Bobby Rydell, but that of American pop culture through the past six decades. He writes of encounters with such 20th century show business giants as Sinatra, Ann-Margret, The Beatles, Red Skelton, Jack Benny and Dick Clark, whose Philly-based American Bandstand helped make Rydell the world’s biggest teen idol in the years between Elvis Presley’s army induction and the advent of Beatlemania. But Teen Idol on the Rocks also is a very personal — and often-painful – story which delves into the darker and more dramatic aspects of Rydell’s life, including the death of his beloved first wife, Camille, his decades of alcohol abuse, and the last-ditch liver and kidney transplant surgery that saved his life.

Humorous, tragic, and inspiring as well, Teen Idol on the Rocks stands as one of the most important non-fiction books of 2016.