On a frigid February afternoon in 2005, Dr. Peter Grinspoon — a Harvard-trained medical doctor with a thriving practice — walked into his office to find a DEA agent and a Massachusetts state police officer waiting for him. Thanks to a tip from a sharp-eyed pharmacist, the officers had evidence Grinspoon had been writing Vicodin prescriptions for his own use in the name of a former nanny who had long since returned to New Zealand. They informed Grinspoon he would be charged with three felony counts of fraudulently obtaining a controlled substance. After years of writing bad prescriptions, sharing pills with patients, and raiding supply closets, Grinspoon had been caught, and his addiction exposed. The following morning, Grinspoon drove to police headquarters where he was booked and fingerprinted. How did a respected doctor who seemed to have it all — a successful practice, adoring patients, top academic credentials, two great children and a lovely wife — end up here? 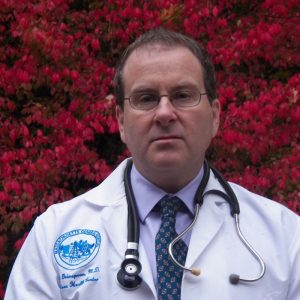 In his insightful, honest, and darkly hilarious memoir Free Refills: A Doctor Confronts His Addiction Grinspoon shares his personal journey to addiction, from smoking marijuana at age 12 to discovering prescription drugs as a medical student. By the time he was a practicing physician, Grinspoon was a full-blown addict. For years it was almost easy to feed and hide his addiction, but once he was found out, Grinspoon faced horrendous consequences: he was stripped of his medical license, suspended from his teaching position, and faced a two-year probation sentence, along with weekly drug tests, and a three month stay at an out-of-state rehab center filled with fellow doctor addicts, all while his marriage plummeted toward divorce. Free Refills is ultimately a story of redemption and Grinspoon shares how, despite his struggles and setbacks, he achieved sobriety and reclaimed his life. Today, he is proudly nine years clean.

Grinspoon’s addiction and recovery story is singular, but his experience being both a doctor and an addict is not. The Journal of Addiction Medicine in 2013 revealed that 69% of doctors abused prescription medicine “to relieve stress and physical or emotional pain.” Free Refills illustrates how easy it is to fuel a drug addiction when you have access to supply closets, drug samples, and a prescription pad.

Listen to Dr. Peter Grinspoon on Steppin’ Out Radio