Richie Supa is a New York singer/songwriter with over 300 songs recorded and four solo albums to his name. Richie’s career was launched via the legendary Long Island band “The Rich Kids,”  signed by Clive Davis to Columbia records. Richie was a staff writer at EMI Music for eighteen years and went on to a career on Broadway where he had the lead role in the hit musical Hair. 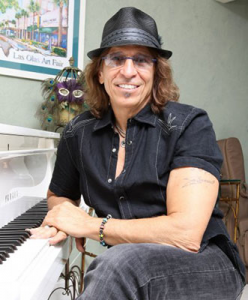 Artists who have cut his songs reads like a Who’s Who of the music industry, with over 50 million records sold. Artists who have recorded Supa’s songs include Bon Jovi, Aerosmith, Ozzy Osborne, Mika, Pink and legendary artists such as Jonny Winter, Levon Helm, Tom Jones, Air Supply, Glen Campbell and Willie Nelson, to name a few. Richie’s songs have appeared in Disney movies, feature films and on network television. Supa co-wrote several number one rock hits including “Back on Earth”, “Misery”, “Amazing” and “Pink” which won a GRAMMY.

Richie’s greatest personal accomplishment is his 27 year recovery. Over this time Richie has helped thousands of addicts with his personal insight and inspiring music. In fact, his songs “In the Rooms” and “Last House on the Block” won Best Song of the Year at the 2009 and 2011 Prism Awards. Richie’s philosophy is simple: “You can’t keep what you have unless you give it away” so he keeps on giving!

Supa is now Director of Creative Recovery at Recovery Unplugged, a rehabilitation facility and program which uses music to aid in patients recovery from drug and alcohol addiction.  RU operates programs in both Austin, Texas and Ft. Lauderdale, Fla.

Listen to Richie Supa on Steppin’ Out Radio