Darryl Strawberry lived the dream of most young boys.  He grew up to play Major League Baseball.  He was a feared slugger for legendary teams like the Mets and the Yankees.  Millions of baseball fans around the nation knew how to chant his name, hoping it would help in long swing to knock another one out of the park.

And for much of that time in the limelight, Strawberry was drunk or high.  He was playing ball and partying.  And not much else.

“I was taking amphetamines every game,” says Strawberry in his Steppin’ Out Radio interview.  “I was out of my mind.” 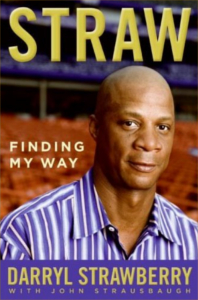 But Strawberry’s use of alcohol and drugs began way before his first at-bat in the majors.  He discusses it in his autobiography, Straw: Finding My Way.

“My dad was a raging alcoholic.  And he beat the crap out of me, and told me I’d never amount to nothing, and I’d never be nothing.”

Later, with his father out of the picture, his issues began.  He’d ditch school, gamble on the streets, and spend his winnings on marijuana and beer.  His athletic prowess eventually scored him a spot on the New York Mets.  And that’s when first got a taste of the hard partying that would ruin his life for years to come.

While flying on the team airplane for his first away game in 1983, another player told him to go into the aircraft’s lavatory for a gift.  He found lines of cocaine waiting for him.

“Welcome to the big leagues, son,” the teammate told him.  Strawberry refuses to identify the player.  “This is the way we do it.”

And Strawberry dug right in.  His time was spent playing ball.  And if he wasn’t playing ball, he was abusing alcohol, drugs and having his way with groupies.

Leave a Reply to Nicole X