Remarkable for its candor about growing up in a Hollywood royal family and for the unflinching portrait of a life lost to both addiction and crime, Cameron Douglas’s book is “consistently unadorned…an affecting memoir of crime and punishment…a tale full of horrors and redemption and an ideal text for scaring at-risk youth straight.” 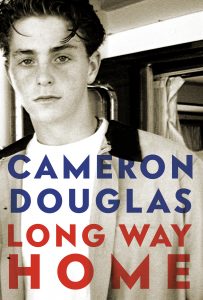 Cameron is the son of Michael Douglas and grandson of Kirk Douglas. Theirs was like any other family, except Cameron’s mom, Diandra, had a menagerie of strange pets including a semi-leopard that would pounce on visitors and a monkey that would steal car keys and cigarettes. Also, Cameron’ s dad was perhaps the greatest movie star of his era (Cameron’s first exposure to fame was being slung naked over Michael’s shoulder on the cover of Rolling Stone). This book is infused with jet-setting players and far-flung locales – Jack Nicholson, Jann Wenner, Sean Lennon, Mallorca, Hollywood, and New York – and the accompanying lifestyle. What could go possibly wrong?

A lot, as it turns out. Cameron was sent to boarding school, where he was expelled for drugs. This caused friction at home. His father became distant and cut off funds. Cameron began moving in questionable crowds. He started using drugs (injecting cocaine and later heroin). He struggled with addiction that resulted in multiple overdoses. He started stealing to feed his addiction. He bought a glock, taught himself how to use it, and then started to deal. This was not going to end well. His father wrote him off because he thought Cameron was going to die from an overdose or be killed by a cartel. Luckily for Cameron, he got busted before either outcome. Not by the cops. But by the DEA. He writes about the time he spent behind bars (seven years, two of which were spent in solitary confinement), the pressure from law enforcement to testify (at great personal risk), and what life was like in prison (turns out there is sex and drugs and even lobster, just like life on the outside). But it’s also a violent place – a kill-or-be-killed environment. Would he ever make it out? More importantly, would he ever be welcomed home?

He has a great story to tell.

Cameron Douglas on Steppin’ Out Radio