Dion DiMucci is an American singer-songwriter who is one of the most prominent rock n’ roll artists of our time. After gaining prominence as the lead singer of the Belmonts with hits such as “A Teenager in Love,” and “Where or When”, he established himself as a solo performer—recording back-to-back hit singles, including “Run Around Sue”, “Wanderer”, “Ruby Baby”, and “Donna the Prima Donna” 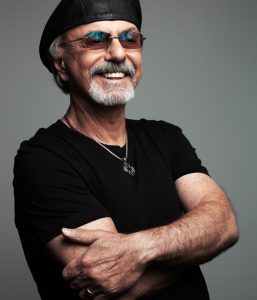 His song, “Abraham, Martin and John” reached Number 4 in the U.S. charts, selling more than one million copies worldwide. He’s been making music ever since.

He suffered a career hiatus in the mid-60’s due to an addiction to heroin.

He was inducted into the Rock and Roll Hall of Fame, has written an autobiography entitled, “The Wanderer: Dion’s Story”, and has a project in the works for a musical about his life called “The Wanderer.”

He has said, “you know, I always saw my story as a young Sopranos, with great music, and a Rocky Graziano, “Somebody Up There Likes Me” ending. A rock n’ roll redemption story.

Dion DiMucci on Steppin’ Out Radio