It’s too easy to define Louis Gossett, Jr. (@LouisGossettJr) by his awards. In addition to his Oscar, he has two Emmys, two Golden Globes, People’s Choice and numerous other professional honors as well as literally dozens of recognition of his works as a humanitarian, a champion of research and education to mitigate the ravages of significant disease and his leadership in eradicating racial strife. 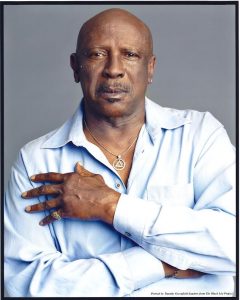 On Broadway, at age 17 he won the prestigious Donaldson Award as the year’s best newcomer. It was for a play called Take A Giant Step.  He has been taking giant steps ever since with dazzling performances in every medium and leadership in helping bring a divided society together. An important stage production and then motion picture opening the door for wider opportunities for African American actors was A Raisin In The Sun, acting together with Ruby Dee and Sidney Poitier which confirmed Gossett as a rising star on both the Broadway stage and on Hollywood sound stages.

Lou Gossett Jr. is an internationally acclaimed actor, humanitarian, social entrepreneur, social justice advocate and visionary, all of which is reflected in roles he has chosen. He is perhaps best known for the portrayal of “Fiddler” in the ground breaking 1977 television mini series Roots for which he won an Emmy, becoming a bona fide star in the process. His riveting talent was further proven by his Oscar winning performance as the hard charging drill Sergeant Emil Foley in the movie An Officer and a Gentleman.  An enduring presence among the ranks of great actors for more than five decades, Mr. Gossett has well earned his acknowledgment as one of the most respected and beloved actors of stage, screen, and television. His hit motion pictures have included his teaming with Nick Nolte and Jacqueline Bisset in The Deep, Skin Game and Tyler Perry’s Daddy’s Little Girl among 164 motion picture and television performances.

Louis Gossett, Jr. was the first African –American male to win the Academy Award for Best Supporting Actor in 1982. His record as a Broadway stage actor is similarly distinguished, among those notable productions A Raisin in the Sun, Golden Boy and Chicago.

In 2006, Mr. Gossett founded the ERACISM Foundation which is dedicated to creating entertainment that brings education and awareness to issues such as racism, ignorance and societal apathy. ERACISM is a foundation dedicated to eradicating racism, violence and ignorance and especially to creating programs to give children at risk a helping hand. It strives to empower individuals through their history and culture by connecting them with their past. If there is a single theme in the life and work of Louis Gossett, Jr., it is the extension of a helping hand.

Mr. Gossett’s work as a producer has also contributed to righting history’s racial misconceptions. His mini-series, For The Love of Liberty: The Story of America’s Black Patriots.  With the acclaimed documentary series which has earned splendid reviews in its presentation nationally on PBS, he and his production partners laid out the vital contribution of African Americans in the defense of this nation from its very beginnings. Having arrived in Hollywood in 1961 on the heels of his Raisin In The Sun success on stage, he was rudely confronted with the segregation and residual hatreds still practiced at that time when visiting black artists were not received in many hotels. He has seen how far we have come and he sees how far there is still to go.