Michael Dadashi is the founder and CEO of Infinite Recovery, a progressive Austin-based addiction rehabilitation center, as well as the founder and company director of a multi-million dollar electronics recycling and resale business, MHD Enterprises. He serves on the board of the national non-profit, Facing Addiction, and recently launched HeartWater, a platform designed to quench a universal thirst for authenticity and hope through powerful stories of all-inclusive recovery. 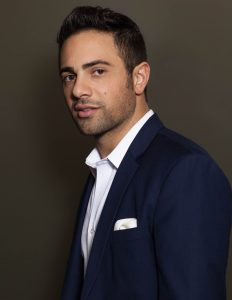 One thing the endeavors have in common: they’re all are focused on shedding a light on second chances. From Infinite Recovery, who’s qualified staff includes many recovered addicts to MHD employing nearly 70 percent recovered addicts. MHD was named the 28th fastest growing private company in the U.S. in 2012 and the 61st in 2013 by Inc. magazine.

Dadashi, a successful 32-year-old entrepreneur, is also a recovered heroin addict and alcoholic. He had his first drink and subsequent blackout when he was 15, which began a years-long battle with substance abuse. A natural salesman even from a young age, he was soon selling and using drugs, including marijuana, prescription pills and eventually heroin, and barely graduated from high school.

After many years of attempted recovery – even after starting MHD Enterprises from his mother’s garage at age 23 – Dadashi finally hit his bottom and has been clean and sober since having a “spiritual awakening” on June 20, 2009. Thankful for the second chance he was given in his own life by friends and family, he has been on a mission to help others obtain the gift of sobriety and find their purpose and passion ever since.

MHD began as a company that gave computers and electronics a second chance but in Dadashi’s quest to serve others as part of his ongoing recovery, it became a way to give other people a second chance through employment and mentorship. He started hiring friends in recovery, as well as family members, defying the usual conventions of business hiring practices.

Dadashi founded Infinite Recovery in 2013 to provide an empowering, therapeutic approach to treatment that honors the dignity, worth and uniqueness of both clients and their families. The Infinite approach combines therapeutic techniques with a “no excuses” attitude, and their extensively trained counselors are partners in treatment with recovery stories themselves. Infinite Recovery provides intensive inpatient and outpatient treatment, as well as high-accountability sober-living facilities and a community center where people in recovery and the surrounding community can enjoy sober fellowship.

Listen to Michael Dadashi on Steppin’ Out Radio