Danny Trejo (@officialDannyT) has developed a prolific career in the entertainment industry. His road to success has been hard earned and is anything but typical. From imprisonment to helping young people battle drug addiction, acting to producing, Trejo’s name, face, and achievements are well recognized in Hollywood.

Trejo grew up on the streets of Los Angeles. Despite spending the latter part of his youth and early adulthood incarcerated, he has risen to become a great actor and better person. Upon his release from Soledad Prison, Danny became involved in programs aimed at helping those who, like him, battled or are battling drug and alcohol addictions. 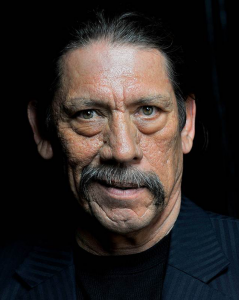 Years later, Danny visited the set of Runaway Train to offer support to a man he’d been counseling and was immediately offered a role as a convict. Since then, he has gone on to star in dozens of films including Desperado, Heat (with Rober deNiro and Al Pacino), the From Dusk Till Dawn film series, Con Air (with Nicholas Cage), Once Upon A Time (with Johnny Depp) and the Spy Kids series of movies.  An appearance in Robert Rodriguez and Quentin Tarantino’s Grindhouse led to a spin-off movie based on the original trailers called Machete in which Danny plays an ex-Federale with a gift for wielding a blade.  The character was the basis for a trilogy featuring Mel Gibson, Charlie Sheen and Amber Heard.  Trejo then co-starred in the Death Race series as Goldberg and later in Muppets: Most Wanted alongside Tina Fey and Ray Liotta.

Television fans have seen Danny in From Dusk To Dawn: The Series, The George Lopez Show, NCIS: Los Angeles, Sons of Anarchy, Modern Family and Breaking Bad.  Danny has lent his voice to animated series like King of the Hill, The Book of Life and Puss in Boots.  Danny has also been in a series of commercials, including an award-winning ad that aired during Super Bowl XLIX.

And if you didn’t think Trejo was busy enough, he has just opened the flagship restaurant of Trejo’s Tacos in the Mid-Wilshire neighborhood of Los Angeles.  Plans are in the works for open a second location in Hollywood.

Aside from Danny’s impressive list of credits, it’s his continuous roles as a devoted father of three and an intervention counselor that bring him the most satisfaction.

Listen to Danny Trejo’s interview on Steppin’ Out Radio