Telling his life story so that it might inspire and help others was a dream that Allan carried with him for more than twenty years. Allan’s upbringing was dirt poor—and deteriorated for the better part of four decades when, finally, he found himself standing before three doors, only one of which opened up into the future. 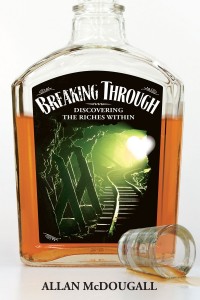 Allan came face to face with himself as a very sick, very broken soul, but an eternal spark that burns in all of us persuaded him to choose the right door. What followed were years of piecing a life together and freeing himself of the poison that put him in the condition of lying in a ditch looking down on the rest of the world.

Allan tells his story in Breaking Through: Discovering the Riches Within.

The book opens us up to the life of Canada’s hard rock miners. So, too, are the personalities of the men who live their days underground and their nights drinking in the saloons. For a sad fact of the life of a hard rock miner is that alcoholism, for many, is an ever-present occupational hazard. And this became Allan’s lot for many years.

“You worked in a 110-degree temperatures and I always ate a lot,” says McDougall in his Steppin’ Out Radio interview. “Because you worked hard, you rewarded yourself hard. And we drank every night.”

“I lived in a bunkhouse for two years, finished my apprenticeship program, graduated with 4.0 average in alcoholism and then decided to get married.”

He is unforgiving in the details of his love affair, as he called it, with alcohol and his story offers a penetrating glimpse into the life of an alcoholic–the subterfuges, the rationalizations and, most heartbreakingly, the pain caused to himself and his loved ones.

As Allan states, and as we come to see in Breaking Through, alcohol was never Allan’s problem. Alcohol was the solution to Allan’s problems. This single point alone makes Allan’s story universal because it provides, without trying to do so, an understanding of everything that lies in back of substance abuse of any kind. Hence, this book’s value to institutions or agencies that deal with substance abuse, to educational programs seeking to grasp the mindset of addiction, to professionals in social work, law enforcement, the justice system or related fields or simply to readers seeking to understand more thoroughly the diversity of what it means to be human.